You must be 21 or older to view this site. 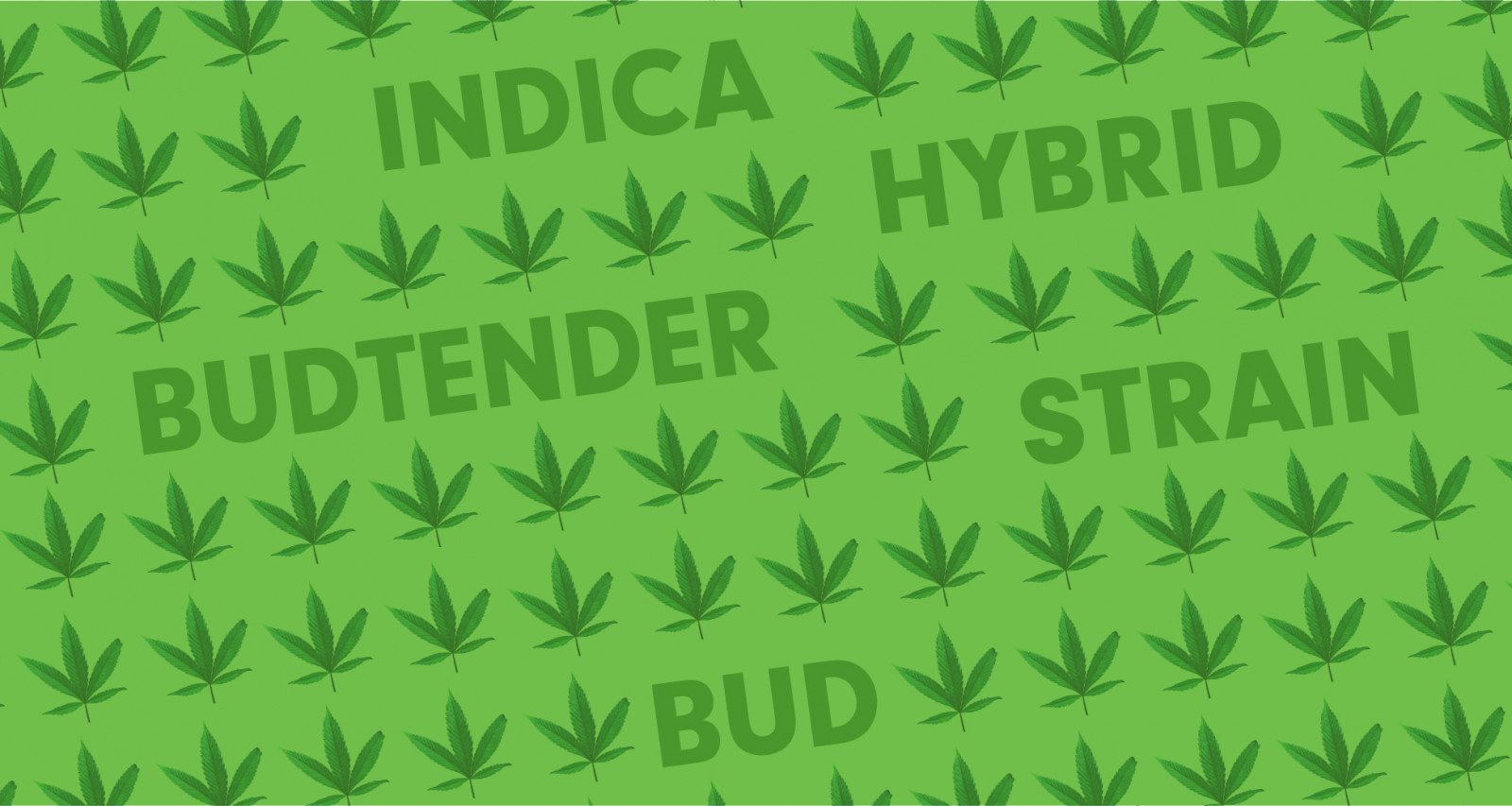 Equipment or materials designed for use in cultivating, growing, propagating, or storing cannabis into the human body.

A method of growing cannabis suspended in air.

A process in which the cannabis plant is stripped of essential oils and trichomes using ethyl or isopropyl alcohol. Once the extra plant material filters out and the remaining alcohol evaporates, sticky hash oil will remain.

A marijuana water pipe that comes in sizes and shapes and is usually made of glass.

The cannabis plant flower; also used as slang for marijuana.

A staff member working within a dispensary where medical or recreational cannabis is sold. Often tasked with making suggestions to customers, as well as handling and showcasing product.

A potent marijuana concentrate manufactured by dissolving the plant in a solvent, usually using butane. BHO’s THC levels are extremely high and creates thick oil, known as honey oil. BHO is also known as wax or shatter, and using it is referred to as dabbing.

Known colloquially as marijuana and is referred to by many slang terms, including bud, ganja, pot, and weed. It can be dabbed, eaten, smoked, vaporized, or applied to the skin.

An abbreviation for cannabidiol, CBD is one of the main elements of cannabinoids. With low potency, CBD is considered effective for medical use without the psychoactive (or “high”) effects.

A method of chemical extraction that reuses the solvent rather than dispersing it into the air.

Cannabis concentrates are strong substances manufactured from dissolving marijuana plant material in a solvent. It’s THC levels are elevated and it produces products like BHO (see above), budder, or wax.

The process of slowly drying flowers from the plant. This allows for a gradual process to maximize flavor and quality.

A store that can legally sell cannabis products—either medical, recreational, or both.

Individualized number of cannabinoids within products. Dosing depends on titration (see below).

Edible and medible cannabis refers to brownies, cookies, gummies and others that are prepared with marijuana for eating or drinking. Edibles/medibles are a popular alternative to smoking or vaping marijuana.

A vaporizing device with a rechargeable battery that heats material, such as bud or liquids containing THC or nicotine, to produce vapor for inhalation. Used as an alternative to smoking cannabis or tobacco.

The different processes by which cannabinoids can be extracted for use from the plant.

Short for hashish, a cannabis resin from the top of the plant, also used for recreational and medical consumption. It is typically potent and can be chewed, smoked, or swallowed.

A concentrated form of cannabis, typically produced with a chemical solvent. BHO (see above) is dangerous to make and highly potent. Hash oil is also known as honey oil.

A variety of marijuana grown for its fiber. It is non-psychoactive and not used for feeling the psychoactive effects associated with cannabis.

A single inhale of cannabis.

A cross between two genetically different strains of cannabis. Hybrids can happen purposely or randomly. Typically used to mix two or more preferred traits of a plant to make another powerful combination.

A rolled marijuana cigarette, also known as a blunt of reefer.

Also known as cannabis and is referred to by many slang terms, including bud, ganja, pot, and weed. It can be dabbed, eaten, smoked, vaporized, or applied to the skin.

Medible and edible cannabis refers to brownies, cookies, gummies, and others that are prepared with marijuana for eating or drinking. Medibles/edibles are a popular alternative to smoking or vaping marijuana.

Also known as a rig, oil rigs are large pipes with heated nails used to vaporize and inhale cannabis concentrates, such as BHO (see above). This process requires heat from torches.

Drug “paraphernalia" are any accessories made for using or concealing drugs, typically for recreational purposes. Examples include bongs, pipes, and scales.

Similar to and used like a tobacco pipe, except for cannabis consumption.

A slang term for cannabis and marijuana.

The strength of marijuana and is typically measured by the amount of THC. Potency is much higher than it was in the past and, currently, the highest potency is around 25%.

To cure, dry, harvest, separate, and trim pieces of the marijuana plant by manual or mechanical techniques.

The ratio of THC in a product. It can also refer to the absence of additives and chemicals in cannabis.

A volatile organic compound used in the manufacturing process of a cannabis product that is not removed by practical manufacturing means.

Also known as an oil rig, rigs are large pipes with heated nails used to vaporize and inhale cannabis concentrates, such as BHO (see above). This process requires heat from torches.

The process in which a chemical enters the body, travels into organs, and then metabolized before elimination. Cannabis’ route of administration has different effects depending on usage. Inhalation takes minutes to produce effects; Cannabis-infused food products’ initial effects are not felt for 30–90 minutes. Age, gender, and weight can impact the rate of absorption and digestion.

A transparent form of cannabis concentrate that resembles amber-colored glass when cold. It has a high THC and is commonly used when dabbing.

A cannabis odor which resembles the smell of a skunk.

Slang name for what is falsely known as synthetic cannabis. Made from dangerous chemicals unrelated to cannabis, spice use can cause serious or even fatal side effects.

Variety of cannabis plants which have particular characteristics that might be used to express a specific desired effect.

An abbreviation for tetrahydrocannabinol, the main ingredient in cannabis responsible for psychoactive effects.

A liquid cannabis extract usually dosed with a dropper. Tincture is often flavored and can be placed on your tongue or mixed in your drink. These are typically very low in potency and used medicinally.

The process of increasing medication amounts until the desired effect is achieved.

A form of cannabis product, such as a lotion or cream, applied to and absorbed through the skin.

A pen-shaped portable vaporizer used with cannabis oil, shatter, or wax. Also called e-cigs or sneak-a-tokes, vape pens are quick to use and can be disposable. The inhaled vapor has minor odor to keep cannabis odor hidden.

Using electricity to heat and evaporate cannabis without the combustion of flames, vaporizing requires a battery-operated handheld or plug-in device, such as a vape pen, which is used for dabbing marijuana concentrates.

A form of marijuana concentrate.

A slang term of marijuana and cannabis.

A number associated with marijuana use and oftentimes signifies the date April 20, which is linked to cannabis.

A number associated with hash oil (OIL upside-down looks like 710) and can signify the date July 10, which is linked to hash oil.